Patients complaining about bad veneers are becoming more and more common as the sophistication of the patient has increased. Patients no longer want an improvement in their smile; they want a great smile. Patients that already have a good smile want an even better one. Porcelain Veneers as a dental art form are increasingly improving, but the level of care to deliver a superior outcome has increased dramatically.

All veneers are made of porcelain, but there are many porcelain varieties. Additionally, there are a lot of dental bonding agents and bonding techniques. Ultimately, it is the skill, training, talent, and artistic ability of the dentist that is the most critical factor in the results that a patient will receive with porcelain veneers

What Can Go Wrong With Veneers? 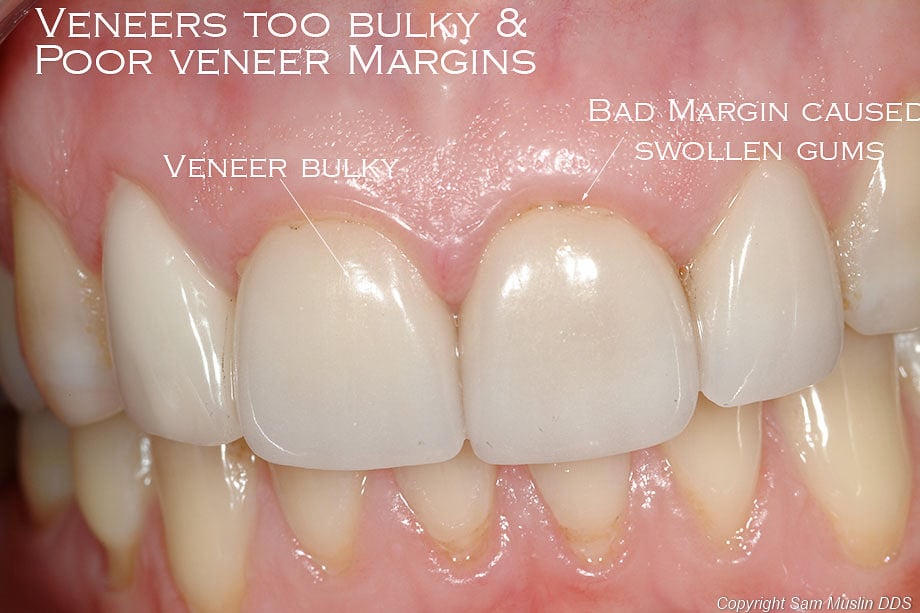 Porcelain Veneers - what can go wrong?

There are many available courses for cosmetic dentists sponsored by manufacturers that sell their products rather than giving an unbiased option, leading to unhappy patients. The dentist may be giving their best effort but cannot separate the manufacturer's hype from the facts. The dentist becomes a victim of the continuing education, and the patient ends up with bad porcelain veneers.

In the following pictures, you will see examples of bad veneers. The veneers are too bulky and poorly crafted, resulting in swollen gums. 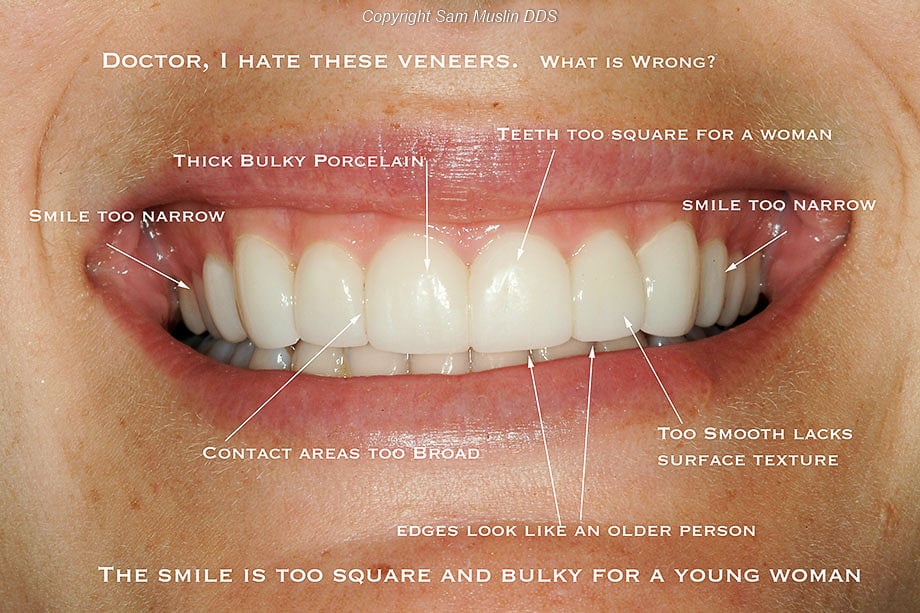 These veneers are bulky with bad margins, which could cause swollen gums.

Some patients cannot identify why their veneers look bad. They don't understand why they hate it until after they have seen an experienced dentist. The porcelain makes their teeth look too square or bulky. Or perhaps their teeth are now too long, and the patient can't speak clearly or has developed bite problems. No matter which problem occurs, the skill of the dentist is the number one issue. It is not whether the dentist uses Lumineers®, or Empress®, or Porcera®, or Cerinate®, or any other manufacturer.

One unhappy porcelain veneers patient went to three additional dentists after getting ten porcelain veneers placed, and not one of these dentists knew the answer. The dentists were not skilled enough to see the problem. Eventually, the patient found the right dentist and had all veneers replaced. 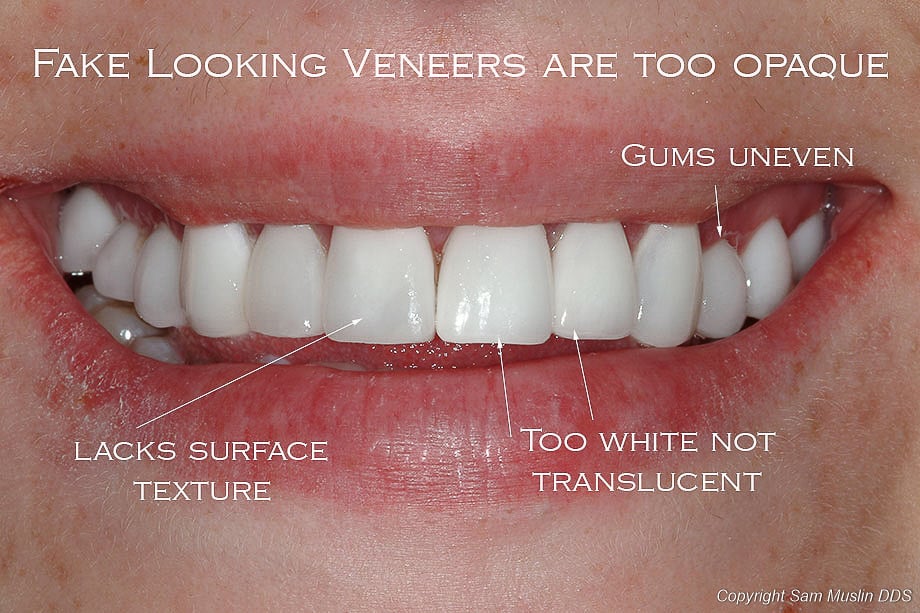 These veneers are bulky with bad margins, which could cause swollen gums.

This featured patient has a friend that is a cosmetic dentist that told her that she does "a lot" of porcelain veneers. She liked the dentist and thought she was a lovely person and had her do the veneers. She was shocked by the result, and after a few weeks, she began to get angry.

She searched the Internet and was determined to find the best dentist and was not going to be fooled by a lot of bragging or talking. When she found Dr. Sam Muslin's site, he advised that the best way to choose a dentist is to see high-resolution before and after photos of actual verifiable patients who had porcelain veneers done and not models or stock photos. 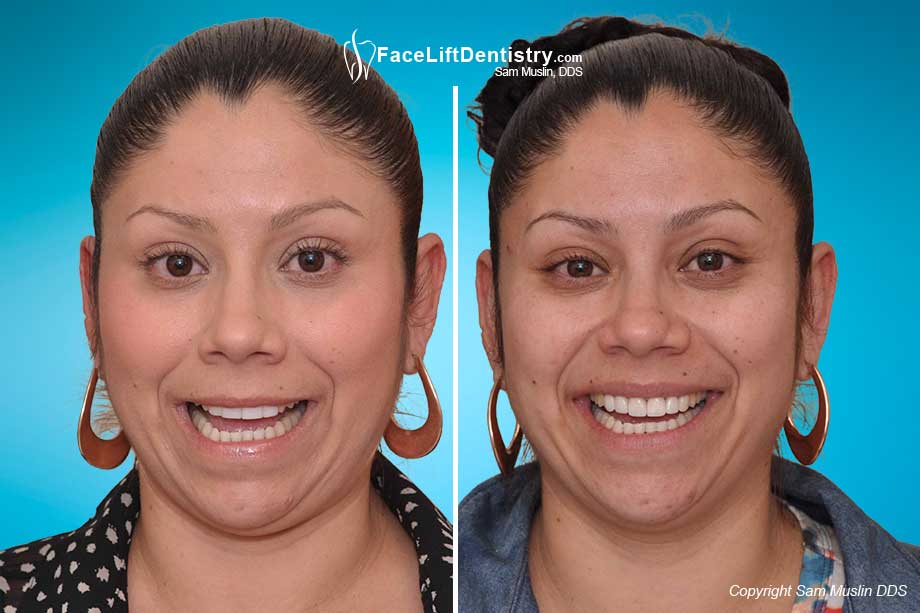 A cosmetic dentist friend convinced her to have veneers done. The outcome was shockingly bad, and she became desperate to have her veneers replaced by an experienced porcelain veneer cosmetic dentist.

He said, "Don't be fooled by a dentist with a photo of him with a movie star. If the dentist doesn't have a lot of before and after photos of his work, find one that does." She would have to travel a few hours to get to Dr. Muslin in Santa Monica, but if that is what you have to do to get good results, she says, do it.

She made an appointment and got the bad porcelain veneers replaced. She said, "It was quick, and it was easy because this dentist knows what he is doing." "He says that he works on the porcelain veneers himself, and now I believe him." "His veneers are the best."

A cosmetic dentist friend did the square fake-looking bad porcelain veneers on the left. Dr. Sam Muslin replaced these, and she now has perfectly matching teeth.

"But, you don't have to believe me because the photos on his website speak for themselves. Even though my gums were messed up with the bad margins and bulky bad veneers, he was able to get the gums to heal and made my new veneers natural-looking, so they match my other teeth". "His temporary veneers were more natural-looking than the porcelain veneers by my friend, the cosmetic dentist." "My advice is simply to go to the best dentist the first time and save yourself a lot of suffering."

The original work was done by a prominent dentist in her community, so don't be fooled. Look at the before and after photos of the dentist's actual work rather than a photo of a professional model. If the dentist does not have pictures of his work, you are most likely seeing the wrong dentist.

Dr. Sam Muslin, a Master of the Academy of General Dentistry, has become renowned for fixing porcelain veneers. 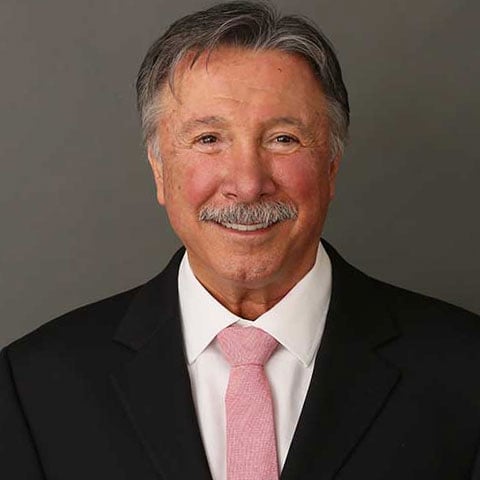